The Barracuda Corporation is a Korean advanced industrial systems manufacturer that was founded in 2097. They provide the technology used for the Speed Pads and Weapon Pads on AGL tracks. In 2154, they decimated the AGL with their Model A until they were banned from competing halfway through the season. They now operate 3 separate subleagues for their ships alongside the AGL. 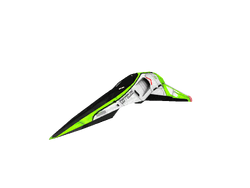 "The Barracuda Model A is the pinnacle of modern AG racing, sacrificing the ability to pick up weapons in exchange for perfect statistics in every other category. Deemed too powerful for the AGL, it is now confined to Barracuda's self-hosted Model A League."

Designed in secret using advanced technology, the Barracuda Model A was intended to be the perfect AG Racer. It sacrifices the ability to pick up weapons for near-perfect flight performance and very strong shielding. It is hard to control, but if it is piloted cleanly its performance is unbeatable. 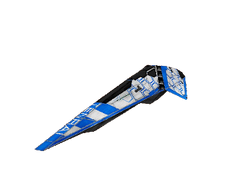 "The Barracuda Model B is the ship used in Barracuda’s self-hosted Drag League. It is by far the fastest AG Racing ship in the world, capable of reaching supersonic speeds with ease. Like Barracuda's other ships, it sacrifices the ability to pick up weapons but retains strong shielding."

Barracuda’s second production model, the Model B uses an oversized rocket engine to reach speeds unmatched by any other ship. It is currently the only AG Racing ship that can exceed the speed of sound in normal conditions. It has strong handling and shielding in addition to its speed.

"The Barracuda Model C is the ship used in Barracuda’s self-hosted Drift League. It drops the power and grip of Barracuda’s previous models for a design centered around drifting. Like Barracuda's other ships, it sacrifices the ability to pick up weapons but retains strong shielding."

The Barracuda Model C is used in the Drift League. Based on earlier drift prototypes from Protonic, it isn’t as fast as Barracuda’s other models but it slides around corners. 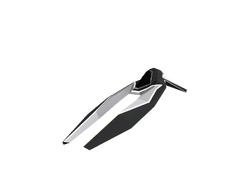 "The Barracuda Model S is the factory default ship used in Barracuda’s Pilot Acclimatization Simulators. Its performance is very similar to the Model A’s, but it has slightly slower acceleration and less powerful shields."

The ship used in Survival events, the Model S is essentially the same as the Model A performance-wise. The main difference is that it is more affected by gravity when it is touching the track floor, meaning it is able to stick to the track abnormally well.

The Model 0 performs roughly equally well in all areas but it can’t pick up weapons. Its combined flight performance makes it faster than the standard ships, but it is kept in balance by its lack of weapons.

Founded in 2097, the Barracuda Corporation is Korea’s largest industrial engineering firm, heavily involved in the technology, mass transit and aerospace industries. Their initial contribution to the AGL came when they designed some of the league’s infrastructure, providing the technology used by Speed Pads and Weapon Pads. They also produce a line of Pilot Acclimatization Simulators, which are used to condition pilots to different tracks, ships and speeds in a virtual environment. After their first interactions with the AGL went smoothly, they began a project to build what they described as “the perfect AG-Racer,” working for seven years in secret to develop what would become their first and only AGL craft.

The Barracuda Model A mysteriously appeared on the AGL ship roster for the 2154 season with no announcements or press-conferences, causing rumors to circulate as the world waited with anticipation to see how it would perform. It didn’t disappoint. Its astonishing speed and agility allowed it to completely outclass everything offered by the competition, winning every race it participated in by more than 10 seconds. During Barracuda’s tenure in the AGL, their characteristic secrecy and dominant performance caused frustration among other teams and sparked allegations from all sides regarding the ship’s design. To this day, it is still unknown whether the ship actually complied with league rules, and some sources still call into question whether or not Barracuda’s so-called pilots were actually real people.

After half a season of the Model A dominating races, collective frustration among all other competitors prompted G-Tek to propose a controversial mid-season rule change that would require all teams to fit weapon systems to their craft and disclose more of their technical data in order to compete. This had the intended effect of disqualifying the Model A, and forced G-Tek’s rival Tenrai to hastily retrofit weapon systems onto their previously unarmed craft. Outraged by G-Tek’s actions and unwilling to disclose any aspects of the Model A’s design, Barracuda permanently withdrew from the AGL.

Left with a revolutionary racecraft but nowhere to race it, Barracuda went silent once again as they worked to plan their next move. At the final race of the 2154 season, they resurfaced and announced that they would be creating their own subleague specifically for the Model A, inviting the AGL’s most elite pilots to participate. Since its creation, Barracuda’s Model A League has seen strong success, visiting the same venues as the AGL but offering a less chaotic, more technical flavor of racing. Though it may have soured relations between Barracuda and the AGL, the debacle surrounding the Model A’s tenure in the series attracted a lot of attention to the Model A League, allowing it to immediately gain a foothold among fans.

Once it was clear that the Model A League was a proven success, Barracuda focused their efforts on creating more unique racecraft for use in one-make subleagues. Their second production model is the Model B, which uses a massive rocket thruster to achieve speeds in excess of the speed of sound. It races on a unique set of tracks specially designed to accommodate its extreme design.

After taking note of the popularity of Protonic’s AG-Drifting in the AGL, Barracuda set out to create their own drift ship, using their financial muscle to poach a large portion of Protonic’s design team. This brought them resentment from those still loyal to Protonic, but it allowed Barracuda to quickly develop the Model C for use in their new Drift subleague.

Though they aren’t competing in the AGL, Barracuda still has a strong influence on the sport due to the technology they provide and their rapidly expanding ship lineup. No matter what the AGL thinks of them, it seems like Barracuda will remain on the cutting edge of AG development for years to come.