Caliburn Brasil is Brazil’s national Anti-Gravity Racing team. Formed in 2134 by a famous ex-racing driver, they rose to prominence as an amateur race organizer before creating an AGL team with support from the Brazilian Government. They were a mainstay in the AGL until 2158, when they were suspended from competition for using an outlawed stabilization system. 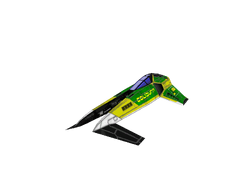 "The Caliburn CR-1 is currently banned from competing in the AGL. While its performance is average in most areas, it is incredibly agile because it uses an outlawed stabilization technology that cancels out all of its lateral momentum."

Caliburn’s CR-1 can easily outperform any standard ship with its immaculate handling. It isn’t particularly fast or strong, but it maintains top speed through any turn, making it unbeatable if flown well.

Caliburn Brasil was originally formed as Caliburn Racing Group (CRG) in 2134 by Renato Cardoso, a living legend among Brazil's racing scene. With a decade of experience in professional landcar racing and twice as much in the underground scene, Cardoso ended his racing career to found CRG with the goal of reviving the glory days of racing before "the world became too boring to take risks.” Caliburn operated entirely under the radar for a number of years, hosting a variety of events for enthusiasts disillusioned with the direction that official motorsport had taken. Participants met with anything they could consider race-worthy: 21st century relics, contemporary vehicles of both wheeled and anti-gravity design, and other oddities.

With several ex-professional drivers bringing influence and funding, Caliburn was able to expand to a country-wide network of traditionalist yet innovative drivers, engineers, and fans. By 2140, they had become a powerful influence on Brazil's identity in auto racing, above the "sellout" professional scene that was so widely viewed with disdain. Where professional racing organisations seemed to fail, CRG succeeded.

When G-Tek announced their intentions to form the first worldwide AG Racing League, Caliburn saw an opportunity to promote their organization on the global stage and help shape the future of racing for the better. They immediately made moves to establish a team for the league, becoming G-Tek’s first official partner on the AGL Commission in 2140. Noting Caliburn’s popularity and influence, the Brazilian Government offered them the position as Brazil’s national AGL team, vowing to let them continue operating autonomously while providing the funding required to cement them as a proper contender. The offer was accepted, and CRG was rebranded as Caliburn Brasil in 2141.

With plentiful technical expertise, a large pre-existing fanbase, and generous funding, the newly-rebranded Caliburn Brasil immediately established itself as one of the AGL’s most popular teams. Since the league’s inaugural season in 2144, they have focused their designs on agility above all else, producing grippy craft that are hard to control but excel on technical tracks.

They continued on this trajectory until G-Tek and Diavolt unveiled their plan to introduce weapons to AGL racing. Caliburn was quick to reject the idea, citing that the random-chance aspect introduced by weapon pads would make the sport too luck-based. They formed an unofficial partnership with Tenrai based on their shared opposition to weapons in racing, but unfortunately for them, the rest of the AGL Commission was on board with the plan. Despite the best efforts of the two teams, Combat Racing was approved by the Commission and introduced in 2152. Tenrai was completely unwilling to fit any weapon systems to their ships, but Caliburn took a more moderate stance, caving to the pressure and incorporating weapons into their design.

This would not be the last of Caliburn’s problems with the AGL. In 2157, an anonymous source from within Caliburn uncovered evidence that the stabilization system used to give the CR-1 its unmatched agility was against league regulations. Led by G-Tek, the AGL Commission launched a year-long investigation which concluded that Caliburn had been knowingly violating the AGL’s rules for several years. Caliburn was immediately suspended from the AGL for 2 years and prohibited from reentering until they could develop a rule-compliant ship. Viewing this as identical to the overbearing regulations that were the downfall of previous racing organisations, Caliburn was outraged. When the news fell upon the Brazilian public, there were widespread protests, petitions, and even riots in the streets of São Paulo.

Today, Caliburn is in a state of flux. Though their reputation is in tatters and they are unable to compete in the AGL until 2161, the constant stream of announcements and press conferences coming from their design team shows that they are determined to make their new ship a top contender. Caliburn is making it clear that when they return, they plan to do so with a vengeance.