Diavolt Engineering is a Russian arms manufacturer that was founded in 2041. They are the main supplier of weapon systems for the AGL. They began competing in 2152 alongside the introduction of weapons into the sport, and have since developed a fierce rivalry with Omnicom after the American media company framed them for the Nova Split Incident. 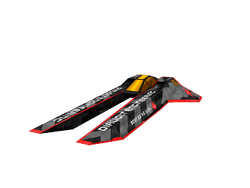 "The Diavolt DI-500 is a heavy duty military-grade beast that packs the most firepower of any ship in the AGL. Built for pilots who prefer to eliminate the competition rather than outrace them, the DI-500 sacrifices all of its agility and acceleration in exchange for top-of-the-line combat systems."

The Diavolt Di-500 is a very heavy, very powerful juggernaut of a ship with the most effective shielding and weapons systems in the AGL. Its power and weight also give it a very high maximum speed but very sluggish turning and acceleration.

Diavolt Engineering was founded in 2041 as a military research firm, becoming one of the Russian Military’s main suppliers of weapon technology by the 2080s. However, with demand for their products dwindling since World Peace was declared in 2099, Diavolt’s executives recognized diversification as essential to their company’s survival. In 2148, they turned to G-Tek and the AGL for assistance, proposing a plan to develop and supply the league with a roster of specially-designed weapons for use in races. At the time, G-Tek was searching for ways to make the sport more exciting and add more depth to events, so they agreed to allow Diavolt to show the plan to the AGL Commission for consideration. It was universally accepted by all members of the Commision apart from Caliburn and Tenrai, so weapons were officially introduced into AGL races in 2152.

With their successful introduction of weapons into the AGL, Diavolt decided to go the extra mile by creating a racing team and competing in the sport for themselves. Since their first season in 2152, they have utilized the chaos of Combat Racing to showcase the full extent of their engineering, fielding a very heavy craft with unmatched combat systems. This combat-focused racing doctrine immediately made them an enemy in the form of Tenrai, who publicly scorns them for their “over-reliance” on weapons and their role in introducing weapons to the sport.

Since the scandal following the Nova Park Earthquake in 2157, Diavolt’s reputation among Omnicom supporters has been tarnished by Omnicom's less-than-kind media outlets, and the particularly brash attitude of their pilots on (and sometimes off) the track doesn't help their case. Diavolt has responded to this animosity by singling out Omnicom on the track wherever convenient, an approach openly encouraged by their fellow dissenters at Scorpio.

As the company that shaped the combat we see in racing today, Diavolt enters the 2159 season as a staple of the AGL. While they have been embroiled in controversy in recent years, their long-term influence on the sport as a whole is undeniable.