Gravity Technologies, more commonly known as G-Tek, is an Anti-Gravity R&D firm based in Japan. Founded by Anti-Gravity pioneers Tomoya Yamada and Kenta Iwazaki, G-Tek is the company behind the first ever anti-gravity device and AG racing as a whole. They are the most influential team in the AGL Commission and they have played a leading role in the evolution of the sport. 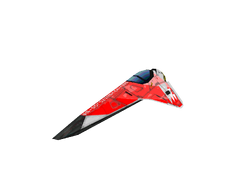 "The G-Tek R34 is renowned for being especially accommodating to new pilots. While it's somewhat sluggish, its exceptional handling allows it to take the most brutal of corners with ease."

A common choice of newcomers to the AGL, G-Tek's iconic R34 has the highest handling rating of any standard ship, complemented by decent shielding and weapon systems. However, a large sacrifice has been made with its slow straight-line speed. While it has the lowest top speed of the standard ships, the R34’s sublime handling means it can still be very competitive in the right hands.

Gravity Technologies was founded in 2116 by Japanese physicist Tomoya Yamada and business student Kenta Iwazaki to pursue development in anti-gravity engineering. The pair initially struggled to convince potential investors, as they were unable to produce a working AG device beyond crude prototypes. 3 years passed until Yamada made the now-famous breakthrough that allowed the creation of a permanent and self-sustaining Anti-Gravity field, a development which would finally convince investors to give G-Tek adequate funding to continue their research. For the next few years, G-Tek experienced an unprecedented growth, iterating on their design and applying it to various purposes. By 2124, their popularity had even secured them funding from none other than the government of Japan, cementing them as one of the most influential companies in the world.

With racing research made the responsibility of a separate division, G-Tek Japan resumed its focus on other outlets for AG tech, notably providing their technology to the future AGL team Orbitronix for use in the space travel industry. Years passed, and G-Tek Japan continued to expand while G-Tek Nexus worked to achieve Iwazaki’s vision for AG Racing. Taking note of the growth of amateur AG racing and the success of G-Tek Nexus’s efforts in Europe, Yamada and Iwazaki agreed to bear the responsibility as the pioneers of AG to centralize racing with their technology. As part of Yamada and Iwazaki’s agreement, G-Tek Nexus would share their developments with G-Tek Japan before being restructured as an independent racing team in order to facilitate mutually beneficial competition in the new sport. Thus, G-Tek’s official racing team was formed in 2139 with extensive cooperation from G-Tek Nexus. At G-Tek’s annual technology expo in 2140, Iwazaki announced the formation of the Anti Gravity League and made an open invitation to all interested companies to participate. Immediately after the announcement, G-Tek Nexus was officially restructured as an independent entity and Nexus International was born. While Nexus has since taken a very different approach to racing than its former parent company, the two still maintain friendly and cooperative relations.

Since the inception of the sport, G-Tek has been the most influential member of the AGL Commission, playing a large role in nearly every decision made by the Commission. Their actions in this position have made them multiple rivals in the past decade. In 2148, motivated by the desire to evolve the sport into a new era of excitement and add more depth to events, G-Tek led the commission in a cooperative effort with several companies (Diavolt Engineering, Anti-Gravity Offense Systems (AGOS), Serpen Energy Systems, and Ethereal Dynamics) to introduce weapon systems to AGL races while maintaining the safety of pilots and spectators. With the support of nearly the entire AGL Commission, weapons were introduced into AGL racing starting in 2152. While this move created an explosion of popularity for the AGL, it caused outrage from the racing purists in charge of Tenrai, who have been openly hostile to G-Tek in the years since.

A few years later, In response to Barracuda’s domination in the first half of the 2154 season, G-Tek led the AGL Commission in drafting the rule change that would ban their Model A from the sport, making an enemy of the Korean juggernaut. They made a similar move against Caliburn in 2158, when it was discovered that their cr-1 was using a stabilization system prohibited by the 2154 rule change. Caliburn was banned from competition until they can enter a ship that complies with the rules. They responded by calling the ban "unjustified" and publicly criticizing G-Tek's actions as head of the AGL Commission.

Despite making several enemies in the past decade, G-Tek remains one of the most popular teams in the sport due to their role as Anti-Gravity pioneers and benevolent guiding force of the AGL - and considering that they're the company responsible for the existence of the sport in the first place, it's hard to argue that their popularity isn't justified.