Hyperion Automotive is a Finnish supercar manufacturer that joined the AGL in 2144 with the goal of promoting their line of high-performance AG Cars. Their recent focus on combat and previous conflict with Omnicom has led some to believe that they have a grudge with the American media company. 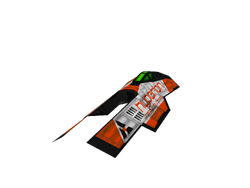 “The Hyperion ILMATAR is a very agile ship with no compromise on top speed. Geared toward defensive pilots, it drops weapon power and acceleration to make way for strong shielding.”

Hyperion’s ILMATAR is a very well rounded ship, with strong speed, handling, and shielding. The only compromises are made by its poor weapon strength and acceleration. Its combination of survivability with agility and speed makes it a solid choice for new and experienced pilots alike.

Since their foundation in 2122, Finnish supercar manufacturer Hyperion Automotive have been renowned by connoisseurs for their top-notch craftsmanship, and hated by media executives for their rebellious and controversial advertising stunts. They were something of an unknown quantity in the world of performance cars until they made themselves famous by taking the record for the world's fastest production vehicle in 2133 - a record they maintain to this day. They created their AG-Racing division in response to G-Tek’s announcement of the AGL, joining the league for its inaugural season in 2144 with a focus on advanced but well-rounded engineering. Over the years, they have become a veteran team with no particularly odd motifs, innocuously competing in the league to showcase their engineering and promote their brand.

Since they were banned from Omnicom’s networks in 2156 after one of their ads blatantly mocked the media giant’s racing performance and censorship policy, reports from behind the scenes have told a whole different story: rumors of a plot to enact their revenge using the AGL, under-the-table deals with Diavolt to make the ILMATAR a perfect O-S2 hunter, and even a secret multi-team alliance to oppose Omnicom. Though the theories are supported by recent improvements to the ILMATAR’s combat systems, all allegations have been shut down by Hyperion's representatives - meaning that for now, those rumors will remain rumors.

Hyperion is continuing their traditional focus on balanced performance in their ships, with pre-season testing for the 2159 AGL season showing notable improvements to the ILMATAR’s defensive capability, and little detriment to its speed or agility. With a history of consistent performance in the AGL, the quality and professionalism of Hyperion’s work speaks for itself.