Lance Systems Aerospace is an Australian aircraft manufacturer and virtual-reality developer that was founded in 2055. Originally a military contractor, they branched out to civilian aircraft and AG development after World Peace was declared. They created the Precision Trials, a special lineup of simulations designed to test pilots’ skills with their prototype Precision Delta. 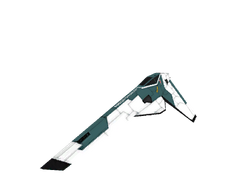 "The Lance Systems Precision Delta is a very agile but slow ship designed for use in the Precision Trial Simulations. Though it was initially conceived as a virtual-only design, a single real-world unit has been constructed to test its viability in the AGL."

Awarded for getting a gold medal in all of the Precision Trials, the Precision Delta is one of the hardest ships to unlock. Despite this, it isn’t very competitive, being very slow and weak. Its only real strength is its handling, which is able to rival G-Tek’s.

An aircraft manufacturer founded in 2055, Newcastle-based Lance Systems Aerospace operated as a military contractor for Australia and other Commonwealth nations for many years. Over the decades, their lineup of fighter jets became famous for cutting-edge technology and world-class agility, giving Lance Systems a reputation for aerial excellence. Since defense contracts ran dry after World Peace was declared at the turn of the century, they have been attempting to diversify to stay afloat, beginning production of civilian aircraft in 2120. Despite their best efforts, they continually failed to turn a profit, entering a period of steady decline that would last for many years. Seeing Diavolt Engineering as an example of a struggling ex-military contractor adapting to the new times, Lance Systems followed in their footsteps and cobbled together an AG Research division in 2153.

In 2155, they unveiled the Precision Trials, repurposing their military flight simulator tech to create an annual series of virtual challenge courses for skilled AGL pilots. They used the data from these events to fine-tune the design for their prototype racecraft, the Precision Delta, in preparation for real-world production. Impressed by the realism and popularity of the Precision Trials, the AGL Commission decided to experiment with virtual venues for AGL races. Both Barracuda and Lance Systems were considered for the job of creating such tracks, but Lance Systems was ultimately awarded the contract because they offered a more realistic simulation at a better price. What resulted was the virtually-recreated Nova Park circuit, which will see its first race in the upcoming 2159 AGL season. Its popularity will determine if more Virtual Tracks appear on the AGL schedule in the coming years.

Though the past half-century has been difficult for them, AG Racing has single-handedly saved Lance Systems from going under. With the continued success of the Precision Trials, the completion of the Virtual Nova Park circuit, and the possibility that they may use the 2159 AGL season to test their Precision Delta prototype, Lance Systems finally has a bright future ahead of them.