MediTech R&D (MTech) is a Canadian medical research firm and emergency vehicle manufacturer that was founded in 2075. They produce the Rescue Droids used at AGL races to catch ships that stray too far from the track, and began competing with their own racing team in 2156. 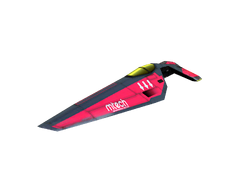 "The MTech P1 uses a specially designed AG unit that drastically reduces its effective weight. It can glide over jumps like they’re nothing, but its performance in all other areas is lackluster at best."

MTech’s ship is less affected by gravity when it is above the track, meaning it glides more easily than other ships. However, it is very slow and its combat systems are weak, making it a difficult craft to win with.

Established in 2075, MediTech R&D is a large Canadian medical company. After growing steadily by developing medical equipment and medications, they expanded into the emergency vehicle market by producing the world’s first AG-Ambulance in 2131. Commonly credited for many of the world-changing medical breakthroughs of the past 50 years, MTech’s contributions to human health have made them an influential and well-respected force in science as a whole. Their emergency and utility vehicles use a special AG Unit that allows them to float very high off the ground if needed, meaning they can be used in areas with uneven terrain or lack of ground-level access.

As the leading player in the development of AG-equipped rescue vehicles, MTech was contracted by G-Tek in 2140 to help develop an unmanned flying droid to keep the AGL’s ships from accidentally leaving the track during races. What resulted were the Rescue Droids we see in the AGL today, hovering over ships on the start-grid and intercepting them when they stray too far out-of-bounds. MTech also stands at the ready for any possible trackside emergencies that may occur during events, and their Rescue Droids are responsible for post-race cleanup of debris on tracks.

During the AGL’s rapid increase in popularity during the 2150s, MTech publicly expressed interest in joining the league, prompting G-Tek to extend an invitation for them to compete. They established a racing team and joined the AGL in 2156, primarily using the league to test new technologies for use in their production vehicles. Their ship is designed around a unique AG Unit that incorporates aspects from the design used by the Rescue Droids and their other vehicles. This hybrid design reduces the effect of gravity on the ship at a certain distance above the track, giving the P1 its abnormally strong gliding performance.

MTech’s admirable history and laid-back approach to racing have grown them a surprisingly large and loyal following for such a young team, and their ship's performance is rapidly improving as they gain experience. They are steadily becoming an established figure in the sport, and given the fact that their contributions to health science have saved millions of lives, their supporters can rest assured knowing that MTech’s efforts have gone toward making the world a healthier place.