Nexus International is an AG Racing team headquartered in Austria and financially backed by the European Union. Originally a subsidiary of G-Tek, they are responsible for developing the first AG Racecraft as well as a large portion of the technologies that make modern AG Racing possible. 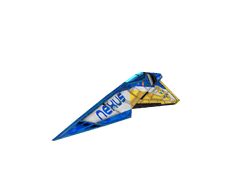 "The Nexus NTI-4 was built for one thing only: pure speed. It sacrifices agility, shielding, and weapon power in exchange for exceptional top speed and acceleration. It’s difficult to fly, but its performance is nearly unrivaled in the hands of a seasoned pilot."

Prioritizing top speed and acceleration over everything else, the NTI-4 requires experience to successfully pilot due to its tricky handling and weak combat capabilities. However, its sheer power makes it incredibly effective in the hands of a seasoned pilot. 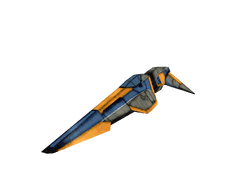 “The NX2000 is a restoration of one of the first AG ships developed. Its lack of any technologies makes it one of the fastest ships on the circuit but requires near perfect piloting as any sort of damage can be lethal.”

Originally developed while Nexus was under G-Tek’s wing, the NX2000 is considered by many to be an important symbol of AG Racing, and technological evolution as a whole. Though it was never intended for competition, it more than matches the top speed of the NTI-4 at the cost of shielding systems and weapon installations. Having served its purpose as a demo for AG Racing development, it is now on display in Nexus's AG Racing museum in Salzburg.

Nexus International began its life in 2125 as G-Tek Nexus, a racing development branch of G-Tek formed by one of the company's cofounders Kenta Iwazaki. As AG cars became more popular in the 2120s, Iwazaki saw motorsports as an important opportunity to facilitate the development of the technology as well as promote it to new audiences. In 2125, he created G-Tek Nexus as G-Tek’s original racing development branch. However, he was initially unable to secure government funding for the new venture, as the Japanese Government was uninterested in contributing to motorsports development. Undeterred, Iwazaki appealed to the European Union, who were currently lacking any AG development companies. They enthusiastically provided sufficient backing to continue G-Tek Nexus' research, so the whole operation was moved to a new headquarters in Salzburg, Austria.

From here, G-Tek Nexus began their central project: the NX Initiative, with the goal of creating a truly revolutionary new generation of racing vehicles instead of just adapting the principles of landcars to accommodate AG Technology. The NX Initiative produced the first prototype AG Racecraft and is responsible for shaping the anatomy of the ships we now see in the AGL. Development continued through the 2120s and 30s and the team’s prototypes evolved from crude mock-ups to fully fledged Racecraft equipped with nearly all of the technology used on modern ships, apart from weapons. In 2133, the now-iconic NX2000 was completed. Considered by many as the first "true" AG racing ship, the NX2000 was demonstrated at G-Tek's annual expo that year, achieving a top speed of more than 700 km/h, to the astoundment of all in attendance. Though it was clearly a very unwieldy and issue-prone prototype, the implication was clear: racing would never be the same.

By the late 2130s, G-Tek Nexus was essentially functioning as an independent company; it was barely involved with G-Tek Japan’s business, and it was entirely funded by its European Backers. Taking note of the growth of amateur AG Racing and the success of G-Tek Nexus’s efforts in Europe, Kenta Iwazaki and his fellow G-Tek cofounder Tomoya Yamada made an informal agreement to bear the responsibility as the pioneers of AG to centralize racing with their technology. As part of Yamada and Iwazaki’s agreement, G-Tek Nexus was to share their developments with G-Tek Japan before being restructured as an independent racing team in order to facilitate mutually beneficial competition in the new sport. Thus, after helping build G-Tek’s new racing team, G-Tek Nexus was restructured as an independent company named Nexus International following G-Tek's announcement of the AGL in 2140. Taking their modern Blue and Yellow color scheme from the NX2000 prototype, they immediately began work on a team for the AGL's inaugural season in 2144.

From this point, the two teams would maintain friendly and cooperative relations despite taking drastically different approaches to AG racing. While G-Tek focused on stable improvements to serve as a reference for others, Nexus fixated on aggressive performance and bleeding-edge technology. This approach to ship design has allowed Nexus to become one of the most successful teams in AGL history thanks to their consistently powerful ships and highly skilled personnel. Though their ship’s lightweight shielding has hampered their performance somewhat since the introduction of combat into the AGL in 2152, Nexus’s forward-thinking approach has allowed them to rapidly adapt their equipment and pilots over the past few years, and in the run-up to the 2159 season they are still a very respectable team that only fools underestimate.