Protonic Incorporated is a Korean mechanic shop chain and racing team founded in 2125. They are widely considered the pioneers of AG-Drifting, and brought the first drift ship to the AGL in 2153. 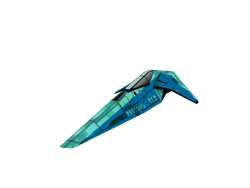 "The Protonic AG4 is an experimental ship designed for drifting. It is very heavy and its top speed is low, but it can slide around corners unlike any other ship in the AGL."

The Protonic AG4 is heavy, but isn't afraid to swing its weight around. Its unique handling and fast acceleration make it useful on technical tracks, but it is below average in every other statistic. It takes a skilled pilot to be successful, but it is very rewarding when flown well.

Founded in 2125, Protonic Incorporated was one of the first mechanic shops to specialize in AG Vehicles. Over the years, their extensive contributions to Korea’s racing scene earned them a reputation for high-quality craftsmanship and innovative design, helping them to gradually expand to more locations and bring in more expertise. They are most well-known for popularizing AG-Drifting, creating and modifying some of the first true AG-Drift ships in the 2140s. Despite their relatively small size, they became a large influence on Korea’s racing culture as a whole, hailed as a go-to shop for anyone looking to modify an AG Craft for drifting.

When the AGL held its first season in 2144, Protonic saw it as the perfect place to attract publicity and spread Korea’s AG-Drifting culture to the rest of the world. They spent several years gathering funds and expertise before beginning work on their craft, planning to bring drifting to the professional scene with a stylish ship that would capture the world’s attention. Nearly a decade in the making, Protonic’s AGL team made its debut appearance in 2153. Their humble background and flamboyant track-presence earned them a lot of press attention for a rookie team, turning AG-Drifting into an international phenomenon - exactly according to plan.

With more publicity bringing in more business and more money, Protonic has been able to expand to a number of locations across Korea since they joined the AGL. They have built a loyal following among fans, iterating on their craft to improve its acceleration and sliding ability. Unfortunately for Protonic, this success caught the attention of Barracuda, who poached a large number of their designers and engineers by enticing them with promises of money and success. Barracuda used the experience of these deserters to develop their own drift ship, which is now used in the popular Model C league, much to Protonic’s chagrin. To date, relations between the two companies and their respective fanbases remain exceptionally bitter.

Despite the setback, Protonic is rapidly recovering and gathering support from investors and fans alike. With pre-season testing for the 2159 AGL showing that the AG4 is more nimble than ever, Protonic is eager to show off their technical prowess and remind the world that they were the true pioneers of AG-Drifting.