Hailing from the rolling valleys of South Tyrol, Italy, Scorpio Engineering is an industrial engineering and construction conglomerate that was founded in 2080. They are responsible for the construction of a large number of AGL circuits, and began competing in 2157 to settle their rivalry with Omnicom. 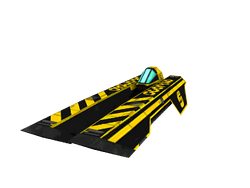 “The Scorpio RS2100 looks like a brick and flies like one too. While it’s not the fastest or most nimble ship on the circuit, its impressively powerful engine gives it the best acceleration the AGL has to offer. Add great shielding and weapon systems on top, and this is an excellent choice for heavy duty combat.”

Quite literally designed to destroy OS-2s, Scorpio’s RS2100 reflects their goals in the AGL, focusing only on combat with little regard for anything else. It has ample firepower and shielding to deal serious damage while staying in the race, and its extremely fast acceleration allows it to recover from weapon slow-down almost immediately. As a result of its hyperfocus on combat, its top speed and handling are both poor. The RS2100 is built using a modular construction which allows each hull to be quickly detached from the central cockpit-engine unit. This allows for extremely fast maintenance on race days, because an entire section of the craft can be swapped out to postpone time-consuming troubleshooting of individual components. It also has the added side effect of the ship characteristically breaking apart into its 3 main pieces when eliminated.

Founded in 2080, engineering and construction conglomerate Scorpio Engineering steadily grew over many years to become one of Italy’s largest corporations, producing everything from construction equipment and heavy-duty transport platforms to power plant machinery. When the AGL was created in 2140, Scorpio was contracted to oversee the construction of several of the league's first tracks. As the AGL expanded to more venues over the years, they became one of the league's main construction contractors.

Until recently, Scorpio had a good relationship with Omnicom, cooperating with them to advertise their services using the AGL. However, this good-will was not to last. In 2156, a disagreement between Scorpio and Omnicom over advertising rights devolved into open hostility between the two companies. This culminated in Omnicom censoring Scorpio’s advertising from all of their networks, publicly denouncing them, and actively trying to prevent them from accomplishing their planned expansion into Austria.

With their business expansion plans up in smoke, Scorpio chose to bring the advertising to the one place Omnicom is unable to censor: the racetrack. After astonishing the AGL Commission by building a fully-fledged racing team from the ground up in only 9 months, they entered competition at the beginning of the 2157 season. From their first race, it immediately became clear that they were far less concerned with winning races than they were with causing as much damage to Omnicom as possible, effectively turning the league into one big advertisement for their company. Omnicom, in turn, attempts to cut Scorpio's races short in order to give them as little exposure as possible, leading to prolonged firefights that frequently result in eliminations. While this provides plenty of entertainment for the folks at home, it costs both teams a fortune in destroyed craft and drags them both to the back of the standings.

While they are more of a rogue aggressor than a serious contender, Scorpio have contributed to the AGL’s sustained growth in popularity by creating a spectacle of explosions and gunfire for viewers. Given the team’s grudge against Omnicom and their copious amount of funding, it appears that they will be a considerable force in the AGL for as long as Omnicom are still around.