Tenrai Racing Development is a Japanese AG Racing team formed in 2140 by ex-G-Tek senior engineer Ami Ikeyama. They follow the principles of “Pure Racing,” a pacifist racing doctrine created in protest of the AGL’s addition of weapons to racing. 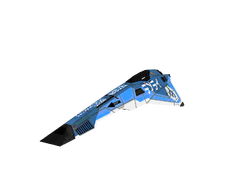 "The Tenrai T1-X was designed in protest of weapon use in the AGL. While it has barely enough shielding to survive and neglects weapon power out of principle, its great performance in all other areas makes it a standout choice for pacifist pilots."

The Tenrai T1-X's exquisite handling and acceleration are offset by its notoriously weak shielding and meager weapons, making it a good choice for pilots who prefer to leave all the explosions and gunfire behind them. Additionally, its Fully Enclosed Cockpit gives pilots the best visibility of any standard ship. While its flight performance is very strong, it requires careful monitoring of shield energy to avoid being eliminated.

Tenrai Racing Development was founded in 2140 by ex-G-Tek senior engineer Ami Ikeyama. Highly competitive and fixated on innovation, Ikeyama was staunchly opposed to the conservative design philosophy favored by her colleagues at G-Tek’s racing division. She argued that as the company that pioneered AG technology in the first place, G-Tek should take an innovative design approach and push the boundaries of AG with cutting edge engineering. In contrast, G-Tek cofounder and CEO Tomoya Yamada favored a balanced approach to ship design, which would set an attainable example for future league entrants. Because she was unable to convince Yamada and their views were irreconcilable, Ikeyama left G-Tek and began plans for her own racing team, citing Yamada's influence as a limiting force for her and G-Tek as a whole.

Though Tenrai didn’t enjoy the copious funding possessed by G-Tek, they set out to incorporate the very best engineering and technology possible into their ship design. Thanks to the technical expertise and guidance of Ikeyama, they were able to field a competitive craft in the AGL’s inaugural season in 2144, achieving a large amount of success for such a low budget team. This early performance gave the company lots of attention, including much-needed financial backing, turning them from a fledgling racing team to a fully established corporation.

From here, Tenrai continued to iterate on their design, staying true to their founder's philosophy of producing cutting-edge, uncompromising racecraft. This innovative mindset, as well as a strong motivation to validate Ikeyama's philosophy by outperforming G-Tek, allowed them to become one of the most popular and successful teams in the early years of the AGL.

They continued in this manner until 2148, when G-Tek and Diavolt proposed to the AGL Commission their plan to introduce combat into AGL races. Tenrai was appalled by the idea and fervently opposed it, making an official statement claiming that introducing weapons to racing would make the sport too luck-based and tarnish the “purity” of racing. To their dismay, the idea was greenlit and weapons were officially introduced into the AGL in 2152. Since the introduction of Combat Racing, Tenrai have become the flag-bearer of a pacifist racing doctrine they call “Pure Racing.” For several years, they simply refused to install any weapon systems in their ships. This worked until the AGL’s 2154 rule changes required all teams to fit weapon systems in order to compete. In response, Tenrai retrofitted their craft the most lightweight weapon systems possible, instructing their pilots to drop all pickups they collect. This semi-dogmatic focus on morality has made them some enemies: Diavolt and G-Tek, whose joint introduction of weapons to racing is often a matter of public scorn from Tenrai representatives. The only team that shares Tenrai's dislike of weapons is Caliburn. They, unlike Tenrai, were willing to accept the rule of the AGL Commission without much protest, but the teams' shared distaste for Combat Racing brought them together in an informal partnership that still exists today.

Though their performance has been impeded in recent years by their new enemies and their insistence on pacifism, Tenrai remains an iconic figure in the AGL. With their world-class team of designers and engineers, they now strive to avoid elimination by being faster and nimbler than the competition.