Wyvern Incorporated is a UK based vehicle manufacturer that controls a significant portion of Europe’s market for public transportation and consumer vehicles. Created in 2050 through a series of mergers of smaller automotive companies, Wyvern has since grown to become one of the world’s most recognizable vehicle manufacturers. After developing an AG device independently of G-Tek, they joined the AGL for its inaugural season in 2144 and have been a mainstay ever since. 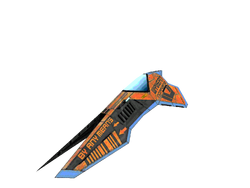 "The Wyvern MKII sacrifices acceleration, shielding, and weapon power in favor of a high top speed and superb handling. While it struggles in combat, its combination of speed and maneuverability makes it a great choice for more daring beginner pilots."

Wyvern’s MKII combines a fast top speed with great handling to make a solid choice for less experienced pilots. However, its acceleration is very poor and it has weak combat capabilities, making it very susceptible to weapons. If the pilot can avoid weapon hits and monitor their shields closely, is a very viable ship.

Wyvern Incorporated was formed in 2050 when prominent Welsh entrepreneur Arwel Jones bought up several struggling British auto manufacturers, merging them into a single company. After many years of decline and stagnation in Britain’s automotive industry, Jones finally decided to take matters into his own hands, founding Wyvern with a single goal, established at the company’s first ever press conference: “To make the British Auto Industry the best in the world, by any means necessary.” Since then, Wyvern have proudly used his words in their slogan, "By Any Means."

Over the next 70 years, Wyvern gradually expanded and became known for their utilitarian design philosophy, developing rough-but-reliable public transport platforms and consumer vehicles before branching out into aircraft and spacecraft. They formed their racing division in 2062 to compete in landcar racing, making it technically the oldest racing team currently competing in the AGL. When G-Tek became prominent on the world stage in the early 2120s, Wyvern’s executives took interest in AG Technology for possible transportation uses. They set up a branch to develop an AG device independently of G-Tek, producing their first prototype AG Car in 2123 and becoming the second company to begin mass producing them a year later. When Kenta Iwazaki announced the formation of the AGL in 2140, Wyvern eagerly adapted their long-standing racing division for AG Racing and entered competition in the league's inaugural season in 2144.

Strong of their proprietary AG device developed independently from G-Tek, Wyvern has made a point of competing using exclusively self-designed parts and equipment, bending the knee to regulation only when strictly necessary - all to prove that G-Tek does not, in fact, own the concept of "Anti Gravity" as a whole. Despite their unquestionable drive, overcoming the series of technical challenges sprouting from their self-imposed rule has proven difficult. These issues have resulted in Wyvern's distinct "cornered fox" style racing doctrine, where pilots, crews, and designers are instructed to take advantage of every possible (rule compliant) opportunity to gain an edge over the competition - striving to win By Any Means. This approach to racing has earned them some criticism from those tired of their constant last-second craft upgrades and unyielding weapon usage, but it has helped them to be successful in league standings over the years. While they are fiercely competitive, they are careful to avoid making any significant rivalries, which they claim to consider “petty" and "disadvantageous.”

With a racing heritage of nearly 100 years, Wyvern’s consistently strong performance in the AGL is no surprise. While some think that their insistence on self-reliance is holding them back, the fact that they are still able to compete at the forefront of the sport is a testament to the wisdom and expertise of their team.